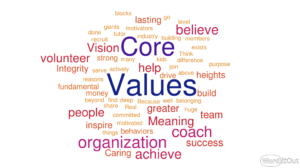 And Core Values go deep. They will help you find and recruit people who share your Core Values and want to join a team of people committed to those Values, not just to making a profit.

There’s been some recent talk, by some high profile people, about how Core Values and Vision is just a bunch of bunk, that they don’t really matter.  That may be true if you don’t care who you work with and the only reason you are doing what you’re doing is to pay the bills and amass more money. But if you want to build a lasting organization that exists for reasons beyond just generating cash, or “shareholder value”, you will want to read the rest of this.

People are motivated by many things besides just money, and values, belonging, and a greater purpose are some very strong motivators. Think of all the things people you know volunteer to do. People volunteer to coach kids, tutor, serve on their schools’ PTAs, help out at shelters, and after natural disasters. They often pay money to do these things. And why? Because of their Values.

I believe in strong Core Values and using them actively in your organization. I also believe that having a “Vision of Meaning” that incorporates those Core Values can help inspire your team to greater heights.

Check out the short video below for an intro to the Core Values of the New Zealand All Blacks. They are the New Zealand National Rugby Team, and they have the winningest record of any professional sports team I’ve been able to find, since 1902… Yes, 1902. Their win percentage in international matches is around 77%, again, since 1902. 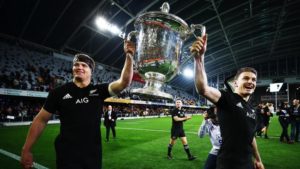 You don’t even have to know anything about Rugby to appreciate that winning over 3 out of 4 matches consistently for more than 100 years is an impressive feat.

And what’s more impressive is that New Zealand has a total population of around 4.6 million people. That’s less than 2% of the United States’ population, and around 7%-9% of major opponents like France and England. New Zealand’s population is about the same as the San Francisco/Oakland, or Phoenix metro areas.

So, before you write off Core Values as bunk, take a look at this quick video and the article linked below.

Posted by sturdymckee.com on Monday, September 4, 2017

Learn more about the All Blacks’ Core Values and what they mean in The All Blacks Guide to Being Successful.

Are you not yet fully committed to developing and implementing Core Values? They may not be right for you and your organization. Read more about how Core Values can undermine your credibility here.

Want to get to work on your Core Values? Think I might be able to help?
Contact me to arrange a free conversation.

I love working on Core Values and helping organizations that think this is important! 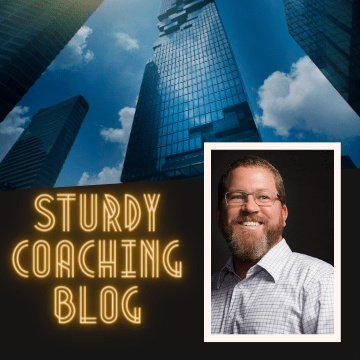